The population’s addiction to their smartphone is starting to pay off for the world of mobile commerce —  mobile device traffic now accounts for almost 50% of overall online retail traffic.

According to IBM, as of February 2015, mobile traffic accounted for 46.5% of all online traffic, which is a 26% increase compared to last year’s traffic.

Tablets, another popular mobile device, are also experiencing an increase in mobile sales traffic.  Tablets are responsible for nearly 12% of all online traffic.  Tablet devices are also responsible for 12% of total online purchases, a category that smartphones trail behind in, coming in at 10% of total sales.  Shoppers are also more likely to spend more on a tablet than a smartphone; tablet purchases averaged at about $98.00 and smartphone users averaged at about $92.00. 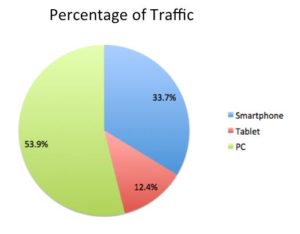 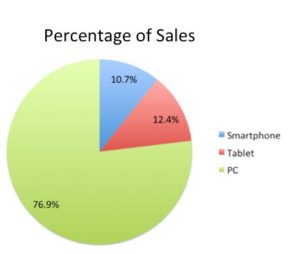 Why would tablets count for significantly less than smartphones in mobile traffic but more in mobile sales?

Tablets are a luxury item, whereas smartphones are everyday conveniences.  Smartphones used to be a luxury item, but as the age of the flip phone went extinct, the smartphone era blossomed.  A majority of the population has a smartphone to take care of daily tasks such as phone calls, texting, and emails.  Some smartphone users are still insecure about making purchases on their phones because they may have more trust for traditional desktop computers or even in-store shopping.  Also, some eCommerce sections of websites do not properly optimize to a mobile version, therefore losing the customer’s attention within seconds.

Tablets have only been in the market as a digital device for about 5 years, and are typically a supplement to a commonplace devices like phones and laptops.  While less of the population may have tablets, are more likely to make purchases on the larger tablet screen than a smartphone screen.

The age of digital shopping is here to stay so whether you’re lounging around or on-the-go, all of your retail needs are no further than the tip of your finger.

Over the past few years, the number of people who own an internet capable mobile device has risen dramatically.... read more

What is Google AMP?

8 Things To Know About Digital Advertising

There’s a lot to know about Digital.  In fact, there’s a TON of information out there.   However, it doesn’t... read more

Hello there! My name is Marissa Esposito and I am the new Digital Campaign Coordinator for Vici where I... read more

How Well Does Digital Advertising Work For The Beauty Industry?

Gorgeously! I am a self-proclaimed beauty junkie, and there is no better place to get a product fix than... read more

What are the most common objections to using digital advertising?

More and more companies are including digital advertising as a critical component to their marketing strategies. However, there are... read more