All around the cyber world, especially in the digital marketing universe, people are insisting that mobile usage will soon exceed PC usage. Although mobile usage has grown over the past few years, it has not eclipsed desktop usage. In fact, it seems as though desktop usage is increasing!

According to the chart below from comScore, desktop usage has remained relatively the same over the past two years whereas mobile is increasing: 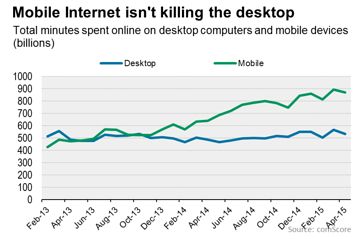 “So mobile is overtaking desktop?” you may ask. However researchers have found that mobile is not usurping desktop, but rather fueling it. Mobile devices are actually unlocking new web time in the morning and the evening, while desktop traffic is dominating the work days. Mobile’s traffic is definitely growing, but that does not mean it is overtaking. Rather, as mobile grows so does desktop.

So next time you want to alter your strategy, ad sizes, or sites to cater to a mobile market, remember that mobile isn’t the only way to advertise. Have a good mix for both devices!

“Completers” Are Better Than “Clickers”

If you are doing a video pre-roll campaign, there are a lot of metrics you can measure, but which... read more

Who starts a company on April Fool’s Day anyways?

Founded on April 1, 2014 who knew what a wild and fun ride it would turn into for these digital... read more

Desktops computers soared to popularity in the 1990’s and became a household item, like a microwave, or a television. ... read more

In the last year Facebook has rolled out an amazing number of new products!  They now have several options... read more

Why is Conversion Tracking and Goal Setting So Important?

Before you start a search engine marketing campaign (aka Pay-Per Click) it’s important to do a bit of homework... read more

Digital opportunities continue to boom and explode. It was forecasted in 2019 digital ad spending will rise by 17.6%... read more

Working remote for the first time? Distancing while connecting!

We, at Vici, have a lot of experience working remotely.  We have your back on this and want to... read more