“So few people actually see posts from top brands on Facebook and Twitter that focusing heavily on those networks can be a waste of time, money and resources.” This quote is from vice president and principal analyst Nate Elliott of Forrester Research in a new research report.

He goes on to say that their research showed, “It’s clear that Facebook and Twitter don’t offer the relationships that marketing leaders crave, yet most brands still use these sites as the centerpiece of their social efforts — thereby wasting significant financial, technological, and human resources on social networks that don’t deliver value.” 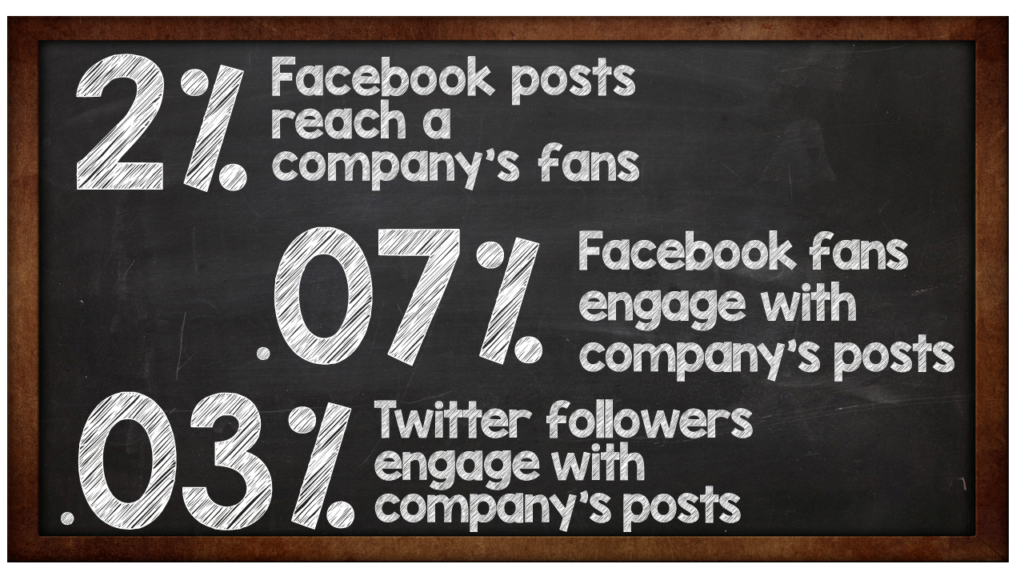 Their findings aren’t surprising.  Another study by advertising agency Ogilvy found that brands’ Facebook posts only reached 2% of their fans. Given that Facebook has announced that they are further diminishing promotional posts starting this month, that figure is likely to go even lower.

So we now know that organic reach is close to zero – what about engagement? That’s still good, right? Nope. Engagement is even worse. Forrester’s research found only .07% of top brands’ Facebook fans interact with each of their posts on average; for Twitter the average is .03%.

What SHOULD a company do? Well digital advertising is one way to get your message heard. But also, the Forrester report says instead of spending a lot of time and resources on building your Facebook and Twitter following, focus on building up your own website’s engagement. Their research showed U.S. adults were three times as likely to visit a business’ site as to engage with its Facebook page.

Companies should be looking at their websites and determining how they can better reach and engage interested consumers – that means better Search Engine Optimization, blogs, communities, comments, reviews, offers, instant chats, and so forth. In other words, stop building traffic for Facebook and Twitter, and focus on building your own traffic.

What are small business marketing resolutions for 2018?

As this year closes and a new one begins, small business owners are seeking strategies that can help them... read more

Change Your Business Hours on Google

When you Google yourself, what do you see? Your customer's are doing searches everyday looking for business information, and... read more

Got a Campaign to Win?

The client has committed and you got the sale. Great! The next thing you should ask this client is, “How... read more

Adding A User To Your Google Analytics

Granting access to your Google Analytics is quite simple.  You can determine what level of access someone has and... read more

Emoji Use on the Rise in Marketing

Locavore, hypermiling, refudiate, selfie, and…. ‘Face with Tears of Joy?’ () One of these things is not like the... read more