What Is Twitch And How Do I Use It For My Video Ads?

What Is Twitch And How Do I Use It For My Video Ads?

Twitch (also called Twitch TV) is the world’s leading live streaming platform for gamers and entertainment seekers and is owned by Amazon. The live streaming service once only for video game live streaming and e-sports competitions, now includes traditional sports, (the Olympics were on the platform in 2021), music broadcasts, concerts, creative content, and “in real life” or IRL streams where you can watch people perform their everyday activities.

When Twitch was first described to me, I had no idea what it was, and the concept was hard for me to wrap my head around (whoa- I feel like my parents now). Think of Twitch as a lot of Facebook Live Streams (but on steroids), being more interactive, and offering ad space. The main demographic of those using this live streaming platform is a younger demo, with over 70% of users falling within the 13-34 age range. 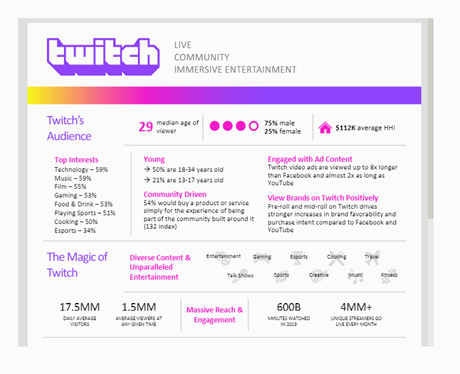 Twitch is a great product for businesses that are looking to reach that younger demographic, gamers, entertainment enthusiasts, males, and/or sports fans. Let me give you a quick rundown of the interface, what kind of ads run on Twitch, and where they appear.

If I wanted to hop onto Twitch and watch people while they are playing various games live, I could click on games and do just that.

In the example above, if I want to watch the first choice, someone playing “New World”, I click on that and it will bring up the live steam of a person playing the game where I can now watch live, and can also interact with the gamer themselves, and other viewers with the chat stream.

From here, Twitch Web Video can show an ad prior to seeing content, and it counts down until the ad is over, which is an un-skippable ad. These video ads can be pre-roll or mid-roll: 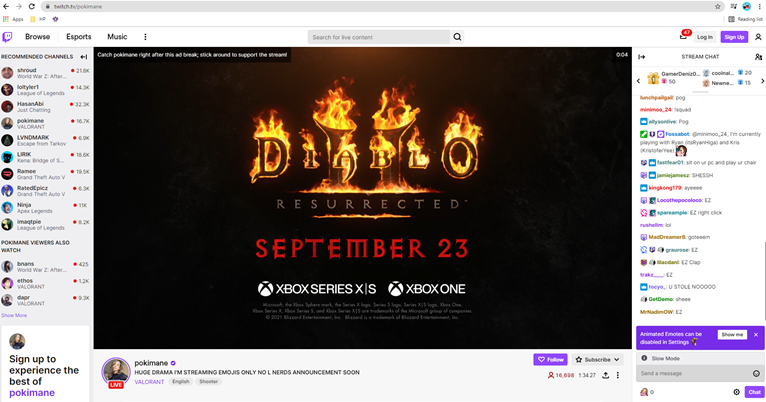 The same experience occurs on the Twitch mobile app where an ad will appear and then the user sees the content: 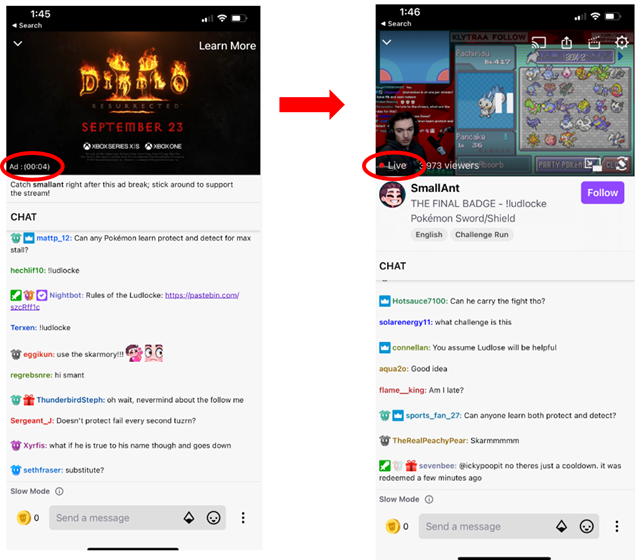 Because these ads are un-skippable, there have extremely high completion rates with an average of 96% completion on our beta tests. For those that are less, it’s typically because someone exited out of the content and shut down their stream while an ad was playing. When you are talking to businesses about Twitch as an advertising platform, be sure to set those expectations and let them know they will not have a high click through rate (CTR), but with that comes a high completion rate, which means people are watching the ad in its entirety. Ads are clickable but it is mainly a branding platform.

Since Twitch is owned by Amazon, it will now be included in all of Vici’s Amazon Premium campaigns. At this time there isn’t enough inventory to run Twitch on its own due to limited ad space opportunities, so we include it in our Amazon Premium offering for video only. Amazon Premium is what we call all the placements that are available within the Amazon platform to serve ads- Amazon.com, other Amazon owned properties such as IMDb.com, IMDbTV and Fire TV, and Amazon Publishers. Amazon Publishers is a network of apps and websites that Amazon has partnered with, so ads can be seen on other websites and apps all while using Amazon targeting data. It will also follow the same type of restrictions as a regular Amazon campaign, but one difference is that they do allow real estate and recruitment ads.

Twitch video ads can be targeted through Behavioral Targeting and Retargeting, and ads can also appear on Twitch through a Custom Audience/Lookalike Amazon campaign.

When it comes to reporting for Twitch, there are two placements that will show if the ads were viewed on the Twitch mobile app or the Twitch website: 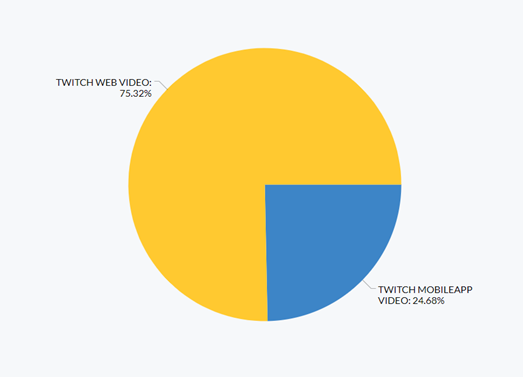 Now that we have a little bit of a foundation for what Twitch is and how it works, let’s talk about the benefits of utilizing it as an advertising platform and why advertisers should care. If a business is looking to reach the Millennial audience, especially males, this is absolutely a platform they want to take advantage of because 50% of millennial males in America use Twitch. There are also 15 million daily active users, 2.2+ million unique content creators per month, and people are watching 106 minutes of content per person, per day.

Twitch is more than a live streaming service; it’s a lifestyle. With the average person watching over 100 minutes per day, users are extremely loyal. By having a streaming service that centers around live interaction, it allows users to be “in the moment” and gather real reactions from players and other gamers. This is also a great way to enhance influencer marketing because they are establishing relationships with those gamers and other viewers, creating more loyalty.

Another benefit to advertising on Twitch is that it isn’t oversaturated. The platform itself has been around since 2011, but the user interface isn’t overloaded with ads, which allows for advertisers to reach an audience that might be untapped by your competitors. If you’re a business that is looking for a “new” audience, this is a great opportunity. A lack of saturation also means your ad will have more of impact on that audience and the possibility for a higher frequency.

With so many ways to advertise on the world wide web and through mobile apps, business owners should always be looking for the newest, latest and greatest way to reach new and existing customers, and Twitch is the perfect platform to achieve those goals.