2014 was a “banner” year for digital growth, both in advertising revenue and time spent with digital media. An eMarketer report estimates that the average US adult will have spent 5 hours and 46 minutes a day in 2014, with digital media. (Their definition of digital media includes online, mobile, and non-mobile connected devices including gaming and streaming devices.) 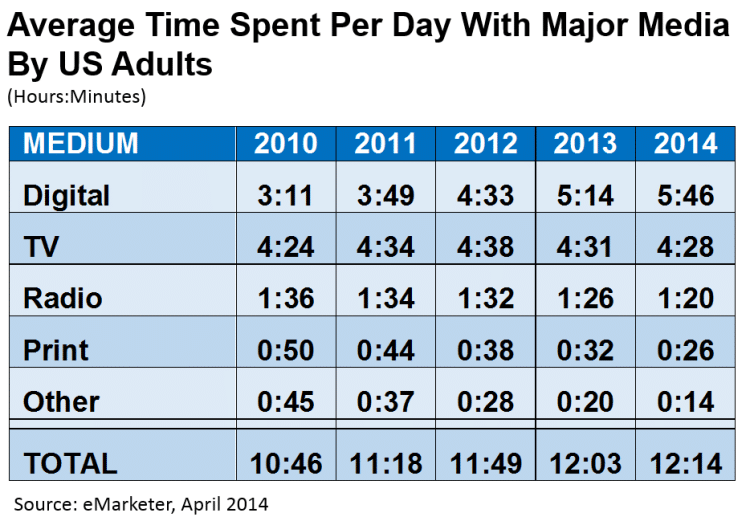 It’s no surprise that they found much of that increase in time spent with digital is due to mobile. In 2014, US adults will spend 23.0% more time with mobile on an average day than in 2013. Of the 5 hours and 46 minutes a day we spend with digital media, it estimates that 2 hours and 51 minutes is on mobile (non-voice), 2 hours and 12 minutes on computers and 43 minutes on “other” digital media.

Digital media’s average of 5 hours and 46 minutes per day in 2014 equates to a 47.1% share of time spent per day with major media.  The graph below breaks out the estimates for each medium. 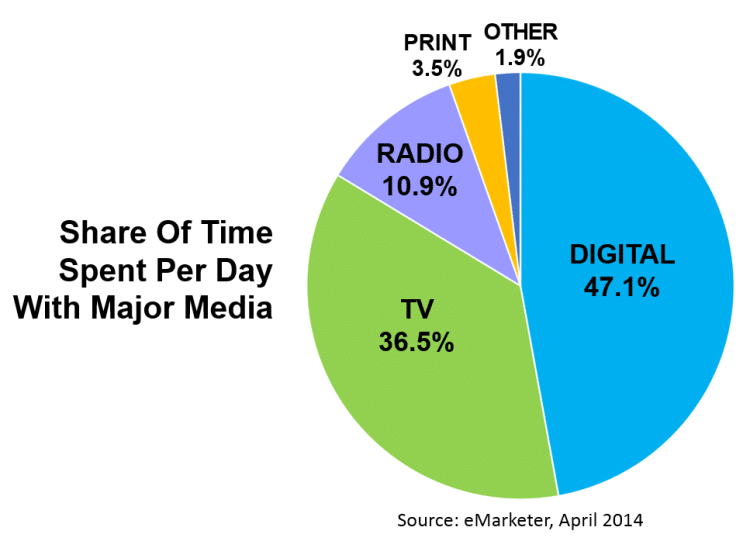 Consumers Are Not Willing to Pay to Block Ads

If you’ve heard of Adpocolypse, and actually feel like it’s the end of the world for digital marketing, you... read more

Be MORE than just a digital salesperson

It is important to make sure to stand out to your clients. According to some recent sales statistics, it... read more

Do You Understand Your Google Analytics Home Page?

Household IP targeting is the perfect product to use when you need to target one-on-one to specific households and... read more

Why do digital and traditional media work well together?

You have heard the phrase, opposites attract. Well the same holds true for your media mix. Traditional media like... read more

One of the things I get asked about by our clients is how they can better the search engine... read more

What is A/B testing, and how can I use it to my advantage?

Digital display advertising is great. It allows you to show potential customers more than just a few words. It... read more