Generation X, the middle population of 65 million Americans ages 34-49, are frequently recognized as being squished in between the older, dominant Baby Boomers and the young, free-spirited Millennials.  And boy does Generation X love their mobile technology and social media!  Despite blatantly targeting every new tech trend to be marketed towards millennials, it’s Gen Xers that spend the most time texting, browsing, talking, and taking selfies on their mobile phones.  Well, maybe not the selfie part…  According to Marketing Charts, Gen Xers account for more time spent on a mobile device in the entertainment, restaurant, auto and telecom category than both the Baby Boomers and Millenials. 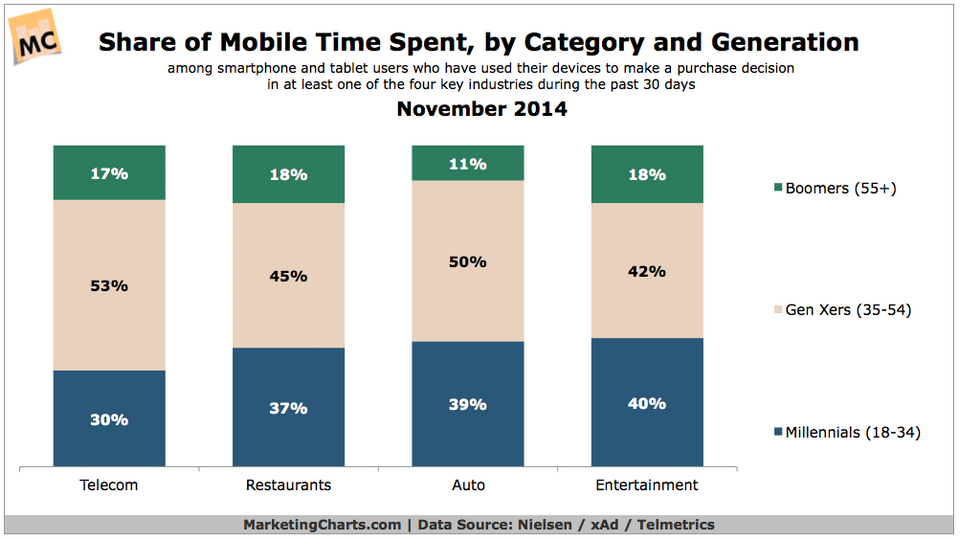 Although Gen X slightly edged the Millenials out in the mobile phone use category, according to an eMarketer report, mobile phones aren’t the only tech device that the “Xers” are addicted to. The generation that grew up alongside the internet is also hooked on Facebook.

The report says that two-thirds of US Gen X internet users will use Facebook at lease monthly this year.  But since this group has proven to be so savvy with their mobile phones, which gives easy access to Facebook, it’s safe to say that these users are using “the Facebook” more often than monthly.

Perhaps because of their loyalty to Facebook, this generation is significantly less venturesome when it comes to trying new mobile social media applications.  EMarketer predicts that 30% of 18-24 year olds in the US will use Twitter at least monthly, but the percentage of Gen Xers is not even half of that, and even lower for Instagram use.

According to a Pew Research study, which claims that Generation X is in fact, “American’s Neglected Middle Child,” Gen X might be devoted to keeping up with their social circles on Facebook, but they are still very traditional in their use of the social media platform:

55% of Millenials say they have shared a selfie on social media.

9% of Baby Boomers have.

Millenials say they have an average of 250 Facebook friends.

Gen Xers say they have an average of 200.

Baby Boomers trail behind with 98.

Because this Generation’s social media habits are so uniform and predictable, it is easier for them to be targeted by marketers.

What Digital Products Should I Be Using?

Top 5 Reasons You Should Be Using Facebook For Advertising

For small businesses, posting on Facebook just isn’t enough anymore. On average, only 2% of your fans will see... read more

How does a small business access digital advertising Co-Op funds? The answer is, unfortunately, many don’t. ... read more

In a land not so far away known as the city of brotherly love, Philadelphia was the backdrop to... read more

What is Mobile Conquesting?

Nearly 80% of US adults own a smartphone and we use them a lot. What used to be a... read more

Over the past few years, the number of people who own an internet capable mobile device has risen dramatically.... read more

What are OTT ads?

Are you down with OTT? You should be! Recent data shows more than half of all American adults are... read more

Facebook has launched a new feature called Info and Ads. This push from Facebook is another step towards their goal... read more