My 14-year-old son refers to Facebook as “Snapchat for Old People” yet he still knows every time I post something on Facebook. Teenagers would like us to believe that Snapchat is life, but is that actually true, and more importantly does it matter for your advertising dollars?

According to a 2018 Pew Research Center survey, today, roughly half (51%) of U.S. teens ages 13 to 17 say they use Facebook, notably lower than the shares who use YouTube, Instagram or Snapchat.

Does this mean advertisers should run away from Facebook and into the arms of Snapchat immediately? Not so fast.

Although reports suggest that teenagers are leaving Facebook for Snapchat, the future is still in a prediction stage. According to a report from eMarketer, by 2022, Facebook is estimated to lose 2.2 million adolescent users, while Snapchat is projected to gain 1.2 million, however, this is still an estimate and a prediction. It is almost impossible to predict what is going to be king of social media 4 years from now.  Trends are hard to nail down. In fact, if you looked back four years ago from now, you’d see that Forbes was predicting that the Justin Timberlake-led MySpace would return to prominence, and that definitely didn’t happen.

Snapchat is striving hard to model Facebook, and recently came out of beta with a measurement pixel that improves attribution and allows them to report on metrics like return on ad spend, however they are still struggling to keep up with Facebook and all the advanced targeting and trackable data they offer.

What we do know for sure right now? Facebook and Instagram are still the top dogs among all internet users: 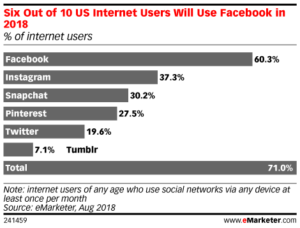 Facebook and Instagram are still the best places to drive conversions and increase return on investment for your customers and remember, they work together.  Consider this quote:

“If Snapchat is firing a rifle, Facebook is dual-wielding machine guns. Snapchat is projected to have the most growth in young users through 2022, but Facebook has two ponies in the advertising race. With adolescents flocking to Facebook’s not-so-secret weapon, Instagram, advertisers can reap the benefits of two very different platforms under one roof.”

Finally, it is always imperative to consider who has the spending power. The 14-year-old I mentioned in the beginning of this blog that resides in my house? He has no job and no money.  You can advertise to him on Snapchat all day long, but the fact remains he has no spending power. Until teenagers, remember the report is those aged 13-17, have more of an impact on the economy, it is smart to leave your advertising dollars with the people who have something in their wallets.

Dana Bojcic (how do you pronounce that? Boy-chich) is a Senior Partner with Vici and Google Analytics Certified. Dana is an experienced trainer and coach of salespeople and managers. Her background includes working for advertising agencies and as a certified Talent Analyst.

Video ad consumption is absolutely on the rise!  A recent study aimed at learning more about consumers’ sentiments regarding... read more

Branding Yourself On Linked In with Customizable Backgrounds

What was once only available to premium members of Linked In has now reached the masses: customizable backgrounds, similar... read more

The Rules for Political Advertising on Facebook Have Changed

From Russia, with Love? Recently both Facebook and advertisers are scratching their heads on how to handle US political... read more

A/B Testing: When you compare different versions of digital ads or website landing pages to see which one performs... read more

Traditional Advertising, Where Does It Drive Consumers? Online!

Consumers are watching TV and listening to the radio and the adverting they are consuming while doing so, is... read more

Is couponing effective on Mobile?

Short answer: no. In fact, it is not just mobile, we have yet to find a digital product that... read more

Digital Ad Reports Are Great But What About The Big Picture?

I receive a lot of digital ads. I’m targeted as much as the next consumer, and the most intriguing... read more

What to expect for advertising budgets and products in 2021?

Facebook is once again going head to head with Google to win the biggest piece of the $59.6 billion... read more

Can I Daypart My Digital Ads?

Yes, but just because you can, doesn’t mean you should! Let’s start with what is dayparting? It is a tactic... read more