(updated 1/24/16) Ad blocking continues to be the hot topic in digital. Ad blocking has been around a long time but is in the news because of the Apple release of iOS 9 which now allows developers to develop apps for the iPhone that block ads. Ad blocking is not part of the operating system, a user would need to download an ad blocking app. Interestingly, Android has had ad blocking for some time with limited adoption.

A recent research study done by Sourcepoint and comScore as reported in Marketing Land pegged ad blocking on desktops at 9% of users for the U.S (see graph below). But they did note that millennials use ad blocking software in higher numbers than other age demographics as did those in the highest income categories.

The report found mobile adoption of ad blockers is still very limited, at 0.1%.

Websites are fighting back against the threat of ad blocker. Many websites are now “blocking the ad blockers” and not allowing users to view content if they have ad blocking software (see examples below). 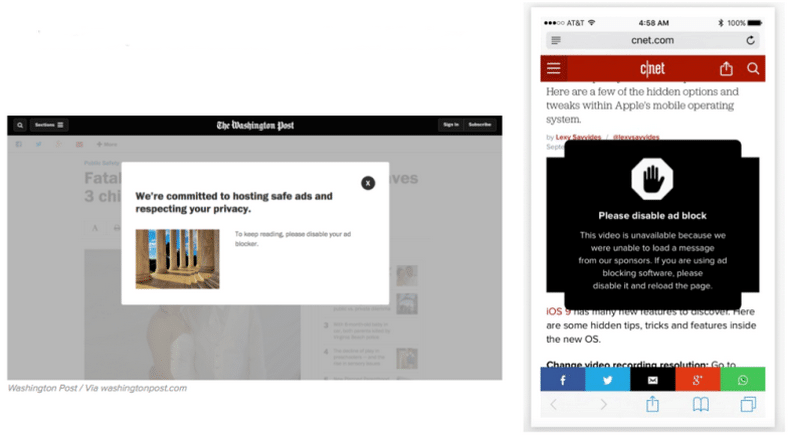 Another side effect now being discovered by people using ad blocking software on mobile phones is that it is causing e-commerce websites not to load correctly on their phone. This means missing pictures of products and the inability sometimes to make a purchase. A Fortune Magazine article reported, “A Fortune investigation shows that an iPhone enabled with Crystal — the top paid iOS (ad blocking) app right now – is unable to fully render the e-commerce sites of many major retailers… This upcoming holiday season (ad) blockers are going to cause a lot of problems.  First, the experience for customers will be lessened. Lots of sites will be missing content, have broken links or customers won’t be able to add certain items to their shopping carts. They’ll probably just think the site is broken, but it’s really their content blocker.”

So how will all this play out? Of course, no one knows for sure but one thing is clear. This is more of an issue for websites who depend on selling their website’s ad inventory and online products more than it is for digital advertisers. Why?  Because as an advertiser you only pay for ads that are served – so blocked ads aren’t an issue – you don’t pay for them!

Mobile Steals Share with Adults and Time Spent with Media

What Does The New F.C.C. Ruling Mean For Digital Advertisers?

What social platform is gaining popularity?

Instagram. According to latest research, people are embracing Instagram and its popularity is growing. So who is using... read more

Ad Blockers: No Need to Panic

In 2010, when internet users were granted the ability to block ads, advertisers were put into a tailspin of... read more

Of the 80 million millennials in the U.S., one-quarter are now parents. Statistics also show that 83% of new moms are millennials. ... read more

What is Cross Platform Targeting and How Does it Work?

In order to understand Cross Platform Advertising, it’s important to first understand its foundation, Mobile Conquesting™, one of our... read more

Do You Understand Your Google Analytics Home Page?

Election season is basically upon us, and we know that every election year, there are so many changes within... read more